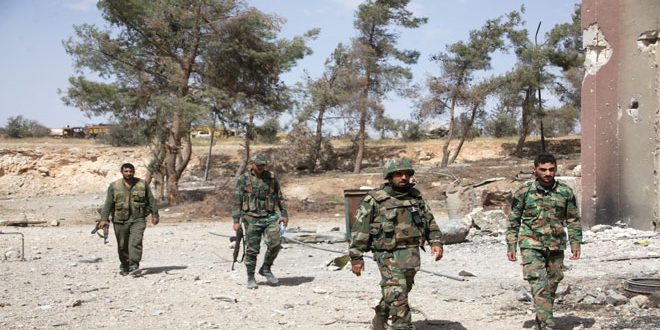 The Syrian army and armed forces continued their military operations against armed terrorist groups all over the country, establishing control on a hill in Deir Ezzor and killing tens of terrorists in other Syrian regions.

An army unit established control over Um Abboud hill in the southwestern countryside of Deir Ezzor province after eliminating the last gathering of ISIS terrorist there.

SANA reporter in Deir Ezzor said that an army unit carried out on Saturday an operation against ISIS terrorists’ gatherings and fortifications in Um Abboud hill, establishing complete control over it after killing dozens of the terrorists.

Army units also clashed with ISIS terrorists on the axes of al-Maqaber and al-Orfi neighborhood in Deir Ezzor city, inflicting heavy losses upon the terrorists.

Later, army artillery shells were fired on a gathering of vehicles for ISIS terrorists in the farms near the Panorama area on the southwestern outskirts of Deir Ezzor city.

Five vehicles equipped with machine guns were destroyed and a number of terrorists were killed as a result of the
operation.

The Syrian Army Air Force targeted the so-called Jaish al-Fateh gatherings and movement axes in the countryside of Hama and Idleb provinces, a military source said.

It inflicted heavy losses upon the terrorists of Jaish al-Fateh in personnel, destroying their positions and tens of their vehicles; score are armored and equipped with machine guns.

In the southern and eastern countryside of Idleb Province, the army air force targeted Jaish al-Fateh terrorist organization’s positions and movement axes in al-Tamanaa, al-Mutawasetah, Maarat al-Nua’man and east of khan Shaikhoun, killing a number of its members, according to the source.

An army unit targeted a Jabhat al-Nusra terrorist group in Daraa al-Balad area in Daraa city, leaving many of its members dead or injured, while their fortifications were destroyed, according to the military source.

In the neighboring Sweida province, an army clashed with an ISIS terrorist group that infiltrated from Khirbet Saad village towards an army post in Tal Bouthaina in the northeastern countryside of the province.

The clashes resulted in the destruction of a vehicle equipped with a machine gun and the death of a number of the terrorist group’s members.

A gathering of ISIS terrorists was also targeted in al-Qasr village, 40 km the east of Sweida city, where many of them were killed or injured.