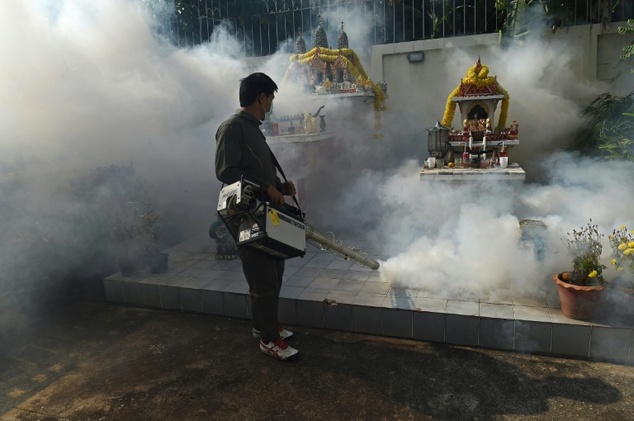 Thai health authorities on Friday said microcephaly in two babies was caused by the Zika virus, in what is believed to be Southeast Asia’s first confirmed case of a link between the sickness and the birth defect.

Tourism is expected to account for 17 percent of Thailand’s GDP this year, and authorities will be desperate to prevent visitor numbers from tailing off after Friday’s announcement.

“Two of the three infants (tested) had microcephaly due to the Zika virus,” Wicharn Pawan, a disease control official at the Health Ministry told AFP.

The World Health Organisation (WHO) this week said any confirmed cases in Thailand would be the first identified in Southeast Asia.

Zika causes only mild symptoms in most, including fever, sore eyes and a rash. But pregnant women with the virus risk giving birth to babies with microcephaly — a deformation that leads to abnormally small brains and heads.

There is no cure or vaccine for the virus, which has infected more than 1.5 million people, mainly in Brazil, since last year, according to WHO.

While Zika has been present in the region for years, there has been an uptick in the number of recorded cases in Southeast Asia in recent months.

The WHO has however noted that the rise in confirmed cases also comes in conjunction with heightened surveillance.

Thai authorities have been monitoring 36 pregnant women infected with the virus.

Earlier this week Thai doctors cleared two other babies with the condition of a link to Zika, a virus spread mainly by mosquitoes.

Virologist Praset Thongcharoen said “4.3 infants per 100,000”, are born with microcephaly in Thailand, twice the global average.

The condition can also be caused by Down syndrome and other infections during pregnancy such as German measles and chickenpox.

Scientists warned this month that the world should prepare for a “global epidemic” of microcephaly as the virus takes root in new countries.

Tourism has buttressed Thailand’s otherwise stagnant economy and authorities have been eager to reassure locals and visitors that the country is not experiencing a Zika epidemic.

Friday’s news could deliver a blow to Thailand’s “teflon” reputation as a tourist haven.

The industry has swiftly bounced back in recent years from coups, violent street protests and bomb attacks.

The news comes just one day before the start of “Golden Week”, an annual Chinese holiday that sees a flood of tourists descend on neighbouring Thailand.

The kingdom is hoping to receive 33 million visitors this year, boosted by surging numbers of visitors from China.