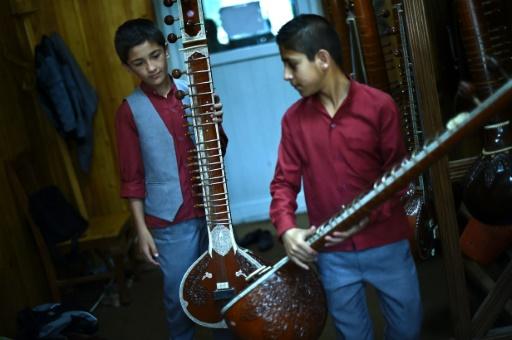 Short and upright in his grey suit, Wahidullah enchants his audience as his fingers dance over the piano keys. The 20-year-old used to sell chewing gum in the streets of Kabul, until he passed an audition at the Afghan National Institute of Music (Anim) and his life changed tune.

At Anim, he teaches music theory and singing, English, strings or percussion, Mozart, Schubert and Afghan classics — the latter particularly helpful when it comes to pleasing their parents.

“Music still has a bad reputation in this country… People think it is forbidden in the Koran, [but] it’s a wrong interpretation,” he says from his office overlooking the courtyard playground — “the happiest place in the country”, by his reckoning.

Nearly a quarter of Afghan children from ages five to 14 work and contribute to the family income, often earning just a handful of dollars per day.

When Sarmast started his programme with Afghan NGO Aschiana in 2010, 14 children including one girl joined his school. But one by one the youngsters dropped out because their family could not afford to lose their salaries, he said.

“We calculated that each child made about $1 a day in the street and we decided to compensate (them)”, he says, explaining how the school — backed by international partners — subsidised the children’s salaries in exchange for attendance.

Some 40 students sign up each year with Anim. Around half are poor, orphans or work in the streets, but all must undergo the same demanding auditions.

“At the beginning my family didn’t want me to leave because of the money,” recalls Wahidullah.

After school he sold chewing gum and led riders off the bus to earn up to 200 Afghanis per day (less than $3).

Arriving at the school aged 13, he began to learn the harp and harmonium, then the piano. Now a fresh graduate, he wants to beome a music teacher himself and dreams of creating more Anims in every province.

Since 2014, the institute has worked with Save the Children and no longer hands out money: “We offer to pay for the education, transport, and free lunch to enable (children) to continue their education,” says Sarmast.

“Working in a repair shop, serving in a bakery, selling stuff in the streets…(children) are very creative at finding a living,” says Zubaida Akbar, a Save the Children official.

Overcoming social prejudice was a major obstacle in getting students off the streets: of the 80 who passed the audition in the first year only nine were allowed by their parents to join, she said.

Fortunately, he says, the powerful were “too busy at that time fighting each other… and (had) no time to implement their decrees.”

Then the Taliban swept to power in 1996, implementing their bans on music and other practices.

Sarmast himself suffered a serious injury in 2014 Taliban attack on the French Cultural Centre in Kabul, that left pieces of shrapnel all over his head and body and a partial loss of hearing that took several months, and surgery in Australia, to recover.

Even today, Anim does not advertise its concerts in Kabul — though it does televise some. That helps win over the families of students, says Sarmast.

The school also broadcasts songs promoting the rights of children and of girls.

“In 2006 when I came back after 15 years in exile (due to war), there were still MPs who wanted to ban female singers on TV,” says Sarmast.

“We are committed to more gender equality: we have an objective of 50:50. We do positive discrimination, we give priority to the girls,” he adds — especially when families try to slip in a son in place of a daughter.

Today a third of the 240 students aged from nine to 20 are girls, and all classrooms and orchestras are mixed.

Boys in grey jackets and burgundy shirts, and girls wearing grey tunics with a burgundy shawl draped over their shoulders, face a teacher singing a traditional song.

Nazira, a 16-year-old orphan from northeast Nuristan in the front row, is “the best cellist in the school”, according to the director. She has already played at the Carnegie Hall in New York and wants to be a conductor.

Twenty-year-old violinist Zafira, meanwhile, has just returned from a year abroad at Yale.

Eleven-year-old Hakim stands in the hallway, admiring Wahid. He only left the street recently — his two older siblings still at work.

Standing confidently with arms crossed, he announces in English that he, too, will become a violinist