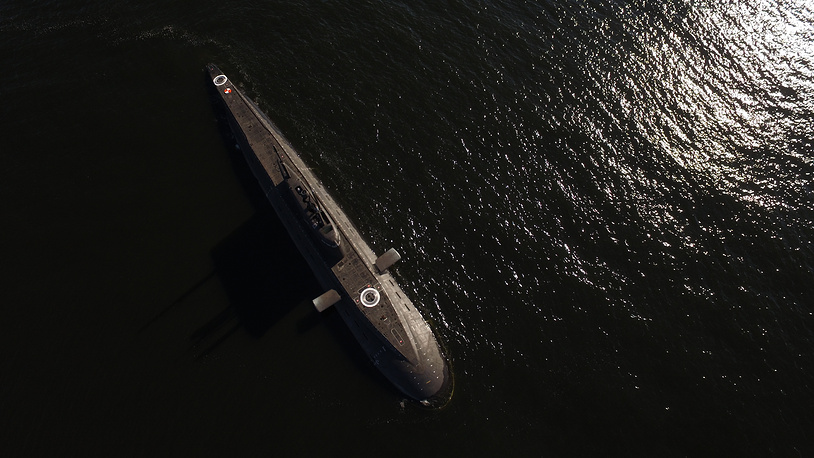 ‘Black holes’ of the Russian Navy

Russia’s Navy has reinforced the combat potential of its Black Sea Fleet by newest diesel-electric Varshavyanka submarines (project 636.6). Four sub of this type are already on duty in the Black Sea and two more are about to join in November 2016. At the moment they are undergoing trials in the Gulf of Finland and in the Baltic Sea. The submarines are reputed to be one of the quietest in their class. Identifying a Varshavyanka submarine in the submerged position is a daunting task. NATO’s military unofficially refers to project 636.6 submarines as “black holes” in the ocean.

Unique bird’s eye view images of the submarines taken from a quadrocopter during the launch and sea trials in the Baltic Sea, as well as the highlights of their combat capabilities in this special feature by TASS.

The name of the whole submarine family – Varshavyanka – dates back to the 1970s, when there were plans for providing large batches of project 877EKM submarines – an export configuration of Paltus (Halibut) submarines of Project 877 to the Warsaw Treaty Organization member-countries. Such submarines are still in service in India, China, Vietnam, Algeria and other countries.

Project 636 belongs with the third generation of diesel-electric submarines. They were developed at the Rubin design bureau, which used Paltus subs as the basis. Their electronic systems were upgraded and combat effectiveness enhanced. Also, they possess the newest radio-electronic and hydroacoustics systems.

Next to the nuclear-powered Borei submarine the Varshavyanka looks small: the displacement of each strategic sub of project 955 is six times that of one Varshavyanka. Each Borei is two and a half Varshavyankas in length. Project 636 is about 74 meters long and ten meters wide, with displacement not exceeding 4,000 tonnes. The pressure hull’s design depth is 240 meters and maximum operating depth, 300 meters.

Kalibr cruise missiles are Project 636.6’s main weapon. In the nose section the Varshavyanka has six 533-mm torpedo tubes. The standard set of ammunition consists of 18 torpedoes or 24 mines and Kalibr-PL cruise missiles, capable of effectively hitting targets about 2,000 away.

According to the Russian Defense Ministry, missiles of that type boast low observability. Capable of following terrain features at extra-low altitudes, the cruise missiles are hard to identify for any air defense. Their accuracy, regardless of the range of flight, is just several meters. Each Kalibr missile is armed with 500-kilogram warhead. The complex incorporates five different missiles based on the anti-ship cruise missile 3M54E Granat. Its export version (Club) can carry different types of payloads to hit targets within a range of up to 300 kilometers.

Project 636’s target detection range/stealth ratio is optimal. A Varshavyanka sub is capable of identifying enemy ships and other targets at the maximum distance, approaching and monitoring them without being exposed and, if need be, of putting its powerful weaponry to use.

The Varshavyanka’s main task is to protect naval bases and sea routes and attack enemy submarines and surface ships. Also, it can perform reconnaissance and patrol missions on high seas and hit coastal infrastructures by cruise missiles.

More Subs in the Family

St. Petersburg’s Admiralty Shipyards has built a family of six submarines for the Black Sea Fleet. All bear the names of Russian cities that enjoy the City of Military Glory title.

The first four submarines were named after southern Russian cities: Novorossiysk, Rostov-on-Don, Stary Oskol and Krasnodar. The fifth (Veliki Novgorod) and sixth (Kolpino) were named after an ancient Russian city in the country’s northwest and a suburbs of St. Petersburg.

At the Army-2016 forum near Moscow in early September 2016 a contract was signed for another batch of six submarines to be built for the Pacific Fleet in 2019-2021.

In the Pacific, the Varshavyanka submarines will add muscle to the Russian Navy’s combat potential in the Far East. They will be able to ply international waters of the South China Sea and the Sea of Japan, “quietly” monitoring the ongoing developments in the region.

Varshavyanka submarines displayed their combat capabilities in real action in December 2015 during Russia’s military operation in Syria. The Rostov-on-Don submarine (B-237) fired a round of Kalibr-PL cruise missiles at facilities of the Islamic State (terrorist organization outlawed in Russia) in Syria’s Raqqa province.

It was the Russian submarine fleet’s first-ever missile attack against a real enemy.