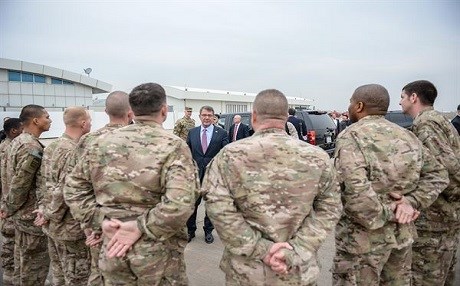 US sending 600 more troops as preparation for Mosul heats up

The United States is committing another approximately 600 troops to Iraq to provide logistical support and advice in the offensive to retake the city of Mosul from Islamic State, the Pentagon announced on Wednesday.

“The troops, in close coordination with the government of Iraq, will provide specific capabilities including logistics and maintenance support; train, advise and assist teams for Iraqi Security Forces and Kurdish Peshmerga for the upcoming Mosul operation; and expanded intelligence resources to help disrupt ISIL’s terrorist network in Iraq and beyond,” reads a statement issued by the US Defense Secretary Ash Carter on Wednesday.

Speaking to the press, Carter said that the campaign to liberate Mosul will intensify “in the coming weeks.”

“We’ve said all along, whenever we see opportunities to accelerate the campaign, we want to seize them,” he added, referring to the additional troops.

Iraqi Prime Minister Haider al-Abadi said in a statement that the decision to boost American troop numbers came after meetings he had with US President Barack Obama in the US last week.

“American President Barack Obama was consulted on a request from the Iraqi government for a final increase in the number of trainers and advisers under the umbrella of the international coalition in Iraqi,” reads the statement.

Some of the new troops will be stationed at Qayyara airbase and others will go to Ain al-Asad in western Iraq where US troops are training Iraqi forces, Carter detailed.

This is the third boost to the numbers of US military personnel in Iraq in the past half year, adding to the estimated 4,565 already in the country. In July, the US announced they would send 560 troops to Iraq, mainly to rebuild Qayyara airbase after it was retaken from ISIS.

In April, an additional 200 American soldiers were deployed to Iraq to assist Iraqi forces.

The new troops will be deployed in the coming weeks.