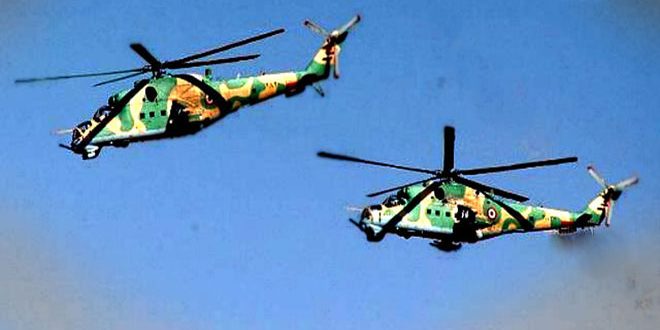 Syrian army and Armed Forces units, backed by the Army Air Force, launched more military operations against the armed terrorist organizations in different areas across the country, eliminating a large number of their members and destroying their equipment, Syrian News Agency “SANA” reported.

The Syrian Air Force destroyed tens of vehicles equipped with machine guns for
ISIS terrorists as it targeted their positions and convoys in the surroundings of al-Shaer Oil field and Tuloul al-Sawaneh, about 60 km northwest of Palmyra city in the eastern countryside of Homs province, a military source told SANA Thursday.

The Syrian Air Force destroyed a number of tanks and armored vehicles belonging to the terrorist organizations in the surroundings of Atshan, Tibet al-Imam, Maardes, al-Kabbaryieh, Tal al-Zaater, al-Shaatha, al-Telisiyieh, Skeik, Mourek and Kawkab in the countryside of Hama province.

An army unit targets a gathering of terrorists and their vehicles in Tisia town in the southeastern countryside of the southern Daraa province.