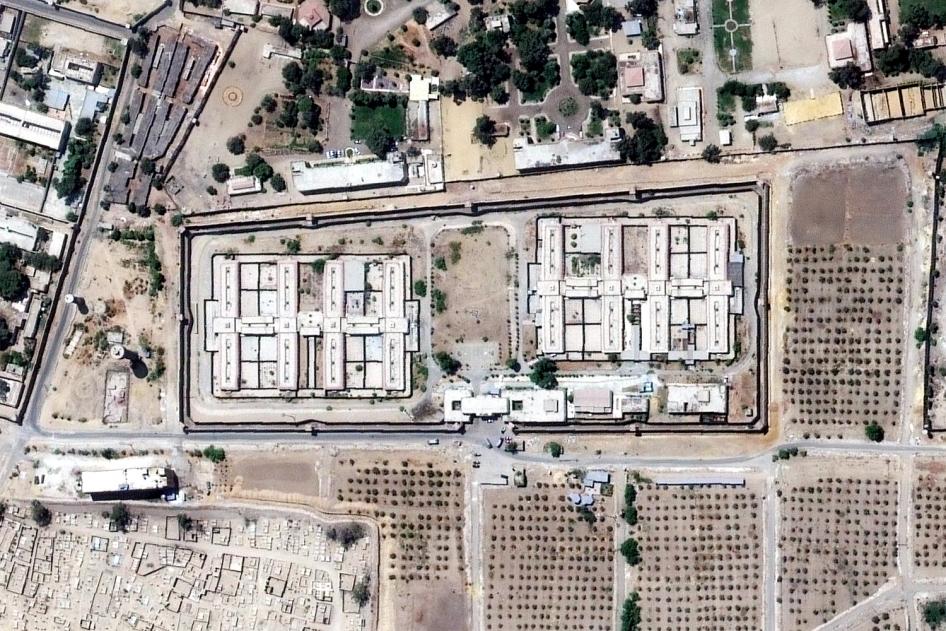 Staff at Scorpion Prison beat inmates severely, isolate them in cramped “discipline” cells, cut off access to families and lawyers, and interfere with medical treatment, according to the 80-page report, “‘We Are in Tombs’: Abuses in Egypt’s Scorpion Prison.” The report documents cruel and inhuman treatment by officers of Egypt’s Interior Ministry that probably amounts to torture in some cases and violates basic international norms for the treatment of prisoners.

The abuse in Scorpion, where inmates are held in cells without beds or items for basic hygiene, has persisted with almost no oversight from prosecutors and other watchdogs, behind a wall of secrecy kept in place by the Interior Ministry.

“Scorpion Prison sits at the end of the state’s repressive pipeline, ensuring that political opponents are left with no voice and no hope,” said Joe Stork, deputy Middle East and North Africa director at Human Rights Watch. “Its purpose seems to be little more than a place to throw government critics and forget them.”

Since July 2013, when Egypt’s military, led by then-Defense Minister Abdel Fattah al-Sisi, overthrew Mohamed Morsy, the country’s first freely elected leader and a high-ranking Muslim Brotherhood member, the Egyptian authorities have engaged in one of the widest arrest campaigns in the country’s modern history, targeting a broad spectrum of political opponents.

Relatives said that conditions in Scorpion deteriorated drastically in March 2015, when al-Sisi, who was elected president in 2014, appointed Magdy Abd al-Ghaffar as interior minister. Between March and August 2015, Interior Ministry officials banned all visits by families and lawyers, essentially cutting off the prison from the outside world.

The ban prevented families from delivering much-needed food and medicine otherwise unavailable in the prison – where there is no hospital or regular visits from a doctor – and amounted to what relatives described as a “starvation” policy that left inmates sick and gaunt.

Between May and October 2015, at least six Scorpion inmates died in custody. Three of their families agreed to speak with Human Rights Watch. Two of the men had been diagnosed with cancer and one with diabetes. Their relatives said that the authorities prevented the men from receiving timely treatment or medicine deliveries, refused to consider conditionally releasing them on medical grounds, and failed to investigate their deaths.

In one case, Interior Ministry authorities refused to provide Essam Derbala, a high-ranking member of al-Gama`a al-Islamiyya (the Islamic Group), with his prescription diabetes medicine, despite orders from a judge and prosecutor, Derbala’s brother and lawyer said. The authorities refused even after Derbala appeared at an August 2015 court hearing shaking, semi-conscious, and unable to control his urination. Derbala died hours after the hearing.

Another inmate, Farid Ismail, a former member of parliament for the Muslim Brotherhood’s Freedom and Justice Party, suffered from Hepatitis C and died in May 2015, after passing out in a hepatic coma inside the prison.

Aisha al-Shater, the daughter of Muslim Brotherhood deputy supreme guide Khairat al-Shater, said that when Ismail failed to answer a daily roll call devised by her father and others in the cellblock during a period when they were confined to their cells, they told the guards, who responded that it was “none of their business.” The next day, guards discovered Ismail unconscious in his cell. He died in an outside hospital about a week later.

“Afterward, even calling to each other was prohibited,” Aisha al-Shater said. “So right now, they say, ‘We are in tombs. We’re living, but we are in tombs.’”

Since the months-long visit ban in 2015, authorities at Scorpion have continued to arbitrarily ban inmates from meeting their families or lawyers for weeks or months. They do not allow inmates to meet privately with their lawyers at any time. Officers, including some high-ranking Interior Ministry officials, have beaten and threatened inmates who went on hunger strike to protest conditions and humiliated and mistreated prominent prisoners during cell searches.

Between Morsy’s overthrow and May 2014, Egyptian authorities arrested or charged at least 41,000 people, according to one documented count, and 26,000 more may have been arrested since the beginning of 2015, lawyers and human rights researchers say. The government has admitted to making nearly 34,000 arrests.

While detainees at other prisons in Egypt have alleged serious abuses, Scorpion has emerged, not for the first time in its history, as the central site for those deemed the most dangerous enemies of the state.

Constructed in 1993 and officially known as Tora Maximum Security Prison, Scorpion was intended to hold “preventive detainees in state security cases,” according to the decree that established the prison.

“It was designed so that those who go in don’t come out again unless dead,” Major General Ibrahim Abd al-Ghaffar, a former Scorpion warden, said during a television interview in 2012. “It was designed for political prisoners.”

Today, little seems to have changed in Scorpion, which holds about 1,000 prisoners, relatives estimate. They include most of the Muslim Brotherhood’s top leadership, alleged members of the Islamic State extremist group, and various critics of al-Sisi’s government, including journalists and doctors.

Egypt’s Interior Ministry should immediately end arbitrary visit bans, ensure regular access to doctors and medical treatment, and provide prisoners with minimum necessities for hygiene and comfort. The Egyptian government should allow international detention monitors to visit Scorpion, and form an independent national committee with the authority to make snap visits to prisons and other detention sites and submit complaints to a special prosecutor.

The Egyptian public prosecution should investigate deaths in custody and charge those with command responsibility for Scorpion in connection with any acts of torture and cruel and inhuman treatment.

“Egypt’s detention system is overflowing with critics of the government,” Stork said. “Ending the abuses at Scorpion is a small step toward improving dire conditions across the country.”