Home » Manchet 2 » Lavrov: US admitted Islamic State is a ‘bigger threat than Assad’ 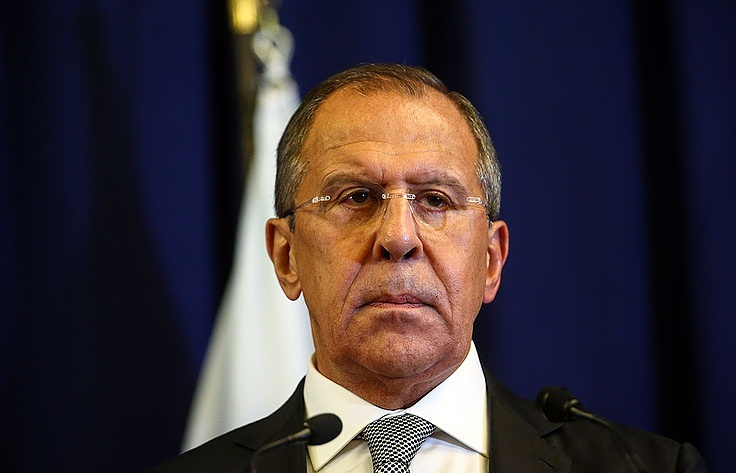 Lavrov: US admitted Islamic State is a ‘bigger threat than Assad’

The refusal or inability to separate opposition forces from militants in Syria indicate that plans to change the Syrian regime remain in force, Russian Foreign Minister Sergey Lavrov said in his speech at the general discussion of the 71st session of the United Nations General Assembly on Friday.

“It is fundamentally important to meet the United Nations Security Council requirement to separate the so-called moderate opposition from terrorists. The United States and members of the U.S.-led coalition bear special responsibility for this process,” Lavrov said.

“The refusal or inability to do that under the current circumstances cannot but strengthen suspicion that some wants to protect Jabhat al-Nusra and the regime change plans still exist, which is the grossest violation of the UN Security Council resolution,” the diplomat stressed.

“It will be impossible to resolve the Syrian crisis and improve the dismal humanitarian situation without suppressing ISIS (Islamic State) and Jabhat al-Nusra (both terrorist organizations are banned in Russia – TASS) and the extremists groups which have merged with them. This is the key to strengthening the regime of cessation of military hostilities and establishing truce on a nationwide scale,” the Russian foreign minister said adding that “the ceasefire regime is senseless without separating the terrorists from moderate opposition groups.”

Lavrov calls to take effort to prevent breakdown of agreements with US on Syria, Lavrov noted. Moscow insists on objective and unbiased investigation into the incidents in Syria’s Deir ez-Zor and Aleppo, Russian Foreign Minister Sergei Lavrov added:

“The most important thing now is to take effort to prevent the breakdown of these agreements, to investigate, objectively and unbiasedly, the incidents in Deir ez-Zor and Aleppo that undermine these agreements, the more so as there are a lot of those seeking to sabotage the coordinated approaches to the Syrian settlement.”

Moscow insists on an objective and unbiased investigation of incidents in Der az-Zor and Aleppo, the diplomat stated.

All factors of strategic stability should be taken into account on the path of nuclear disarmament, Russian Foreign Minister Sergey Lavrov said in his speech.

“The advancement on the path of nuclear disarmament should proceed with account taken of the combination of factors, which can influence strategic stability, including the creation of unilateral global missile defense systems; the development of strategic non-nuclear strike weapons; the threat of deploying arms in outer space; inability to put into effect the Comprehensive Nuclear Test Ban Treaty (CTBT) and the growing imbalance of conventional arms in Europe,” the Russian foreign minister stressed.

On NATO and its ultimatums

As soon as NATO drops the policy of ultimatums seeking to win unilateral advantages the discussion of the regime of control over conventional weapons in Europe could be resumed, Lavrov stressed:

“NATO member states have brought the regime of control over conventional weapons in Europe to a dead end. All the ideas of resuming discussions of this topic will have any sense only when the North Atlantic alliance understands that the policy of ultimatums aiming at winning unilateral advantages is absolutely futile.”.

On North Korea and its nuclear tests

The situation on the Korean Peninsula following North Korea’s recent actions should not be used as a pretext to expensively militarize Northeast Asia, to install another deployment area of the United States’ global anti-missile system, the Russian Foreign Minister explained:

“North Korea’s recent actions violating the United Nations Security Council resolutions must be stopped,” he stressed. “We call on Pyongyang to abandon its nuclear missile programs and get back to the regime of nonproliferation of nuclear weapons.”

“AT the same time, it is inadmissible to use this situation as a pretext to stage extensive militarization of Northeast Asia, to install another deployment area of the U.S. global anti-missile system,” Lavrov said.