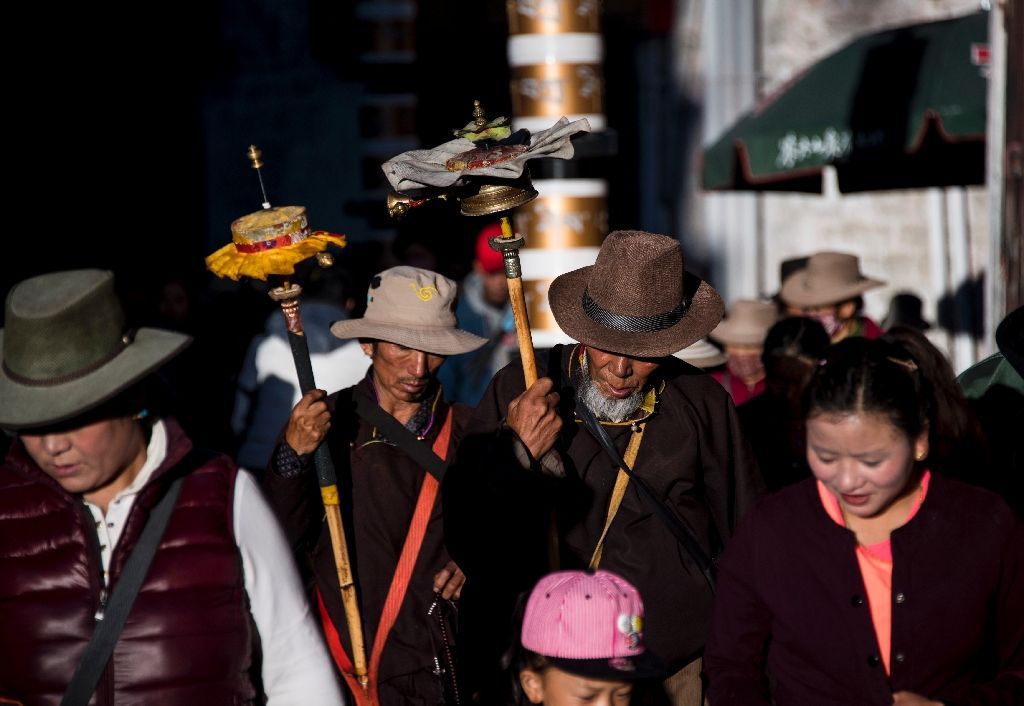 The sun has yet to rise over Lhasa, but dozens of colourfully dressed pilgrims are already gathered and reciting prayers at the entrance to Jokhang, the most sacred temple in Tibetan Buddhism.

Many of those gathered — Tibetans and Han Chinese visitors — say religion is flourishing under Beijing’s rule, with adherents enjoying the freedoms they need to follow their faith.

But this sense of freedom does not extend to the men who live inside the monasteries, analysts and monks say.

Their lives and their movements are heavily regulated by a government eager to avoid any hint of disobedience in the restive region which, although technically autonomous, is tightly controlled by Beijing.

“We are not free,” said a 33-year-old monk from the neighbouring province of Sichuan. AFP is not naming the man.

“To get into Tibet from another province, you need a certificate with your name, address and identity card number.

“Everything has to be stamped by the monastery, the Bureau of Religious Affairs and the police,” he said outside the Jokhang monastery.

Nearby, groups of policemen — some from Tibet itself — are discreetly patrolling, some holding walkie-talkies and others guns.

This area of the capital is calm for now, but authorities are not taking any chances. In 2008 it was the site of deadly riots which erupted following protests by monks against Beijing’s rule in the region.

The government clamped down after a period of violence against non-Tibetans, in particular the Han Chinese — who remain a minority in Tibet.

Faith is an integral element of Tibetan identity and nationalism and is therefore perceived as a potential threat to the authority of the Chinese state, explained Kate Saunders of the US-based NGO International Campaign for Tibet.

Some ordinary Tibetans dismiss the idea their religious freedom is being curtailed.

“I come here morning and night. I have never had any problem,” the 31-year-old Tibetan taxi driver Zangmai says at the temple.

“I’ve been praying here since I was about five or six, and one day I’ll bring my son here too,” he adds as he throws dried grass into a large incense burner, which belches out grey smoke.

For Zhaxi Nima, a 37-year-old Tibetan pilgrim whose left leg is amputated below the knee, faith remains an integral part of his routine.

“Why do I come to pray, despite my handicap? Tibetans are just like that, it’s our way of life,” he explains.

It is not so simple for religious figures and institutions, experts say.

“Temples, monasteries… Of course, they are controlled,” said Jens-Uwe Hartmann, a specialist in Buddhism at Ludwig Maximilian University of Munich and an expert on Tibet.

“What they are doing is very closely observed.”

If religious leaders emerge who are not approved by the Chinese Communist Party, they simply disappear, Hartmann said, adding: “So you’d better keep your mouth shut.”

Beijing says it “peacefully liberated” Tibet in 1951 and insists it has brought development to a previously backward region.

But many Tibetans accuse the Chinese government of exploiting natural resources, as well as promoting Han activities and business at the expense of locals and the environment.

They also accuse authorities of diluting their culture and faith as a way of exerting further influence.

China recently unveiled an initiative to get tens of millions more tourists to visit the region, and many of them wander through Jokhang along with the faithful.

Barkhor, the road around the temple that pilgrims walk in a clockwise direction as a sign of respect, displays little Chinese flags on the first floor of buildings. The street is dotted with shops and restaurants to cater to visitors from other regions.

“People’s faith here is very impressive. It’s not something you see anywhere else in China,” says 22-year-old Peng Meng.

“In the rest of China, because of the Party, countless temples were destroyed,” says a young Han, miming a fist coming down on a building.

“In Tibet, Buddhism is preserved,” he adds, although many religious structures were destroyed during the Cultural Revolution of the 1960s and 1970s.

Wang Xiaobin of the China Tibetology Research Center, an official body based in Beijing, said monks were required to use travel certificates after a wave of self-immolation which began in 2009.

A total of 145 Tibetans, the majority of them monks, have set fire to themselves in the past seven years in protest against Beijing’s rule and 117 of them have died, according to International Campaign for Tibet.

“Most of them came from Tibet’s neighbouring provinces. And the regional government is worried that some of them are coming to self-immolate in Lhasa,” Wang said.

“China recognises ‘freedom of religious belief’, not ‘religious freedom’. Those are different things,” he added.

“Clearly one has the right to believe, but there are limits to religious activity.”