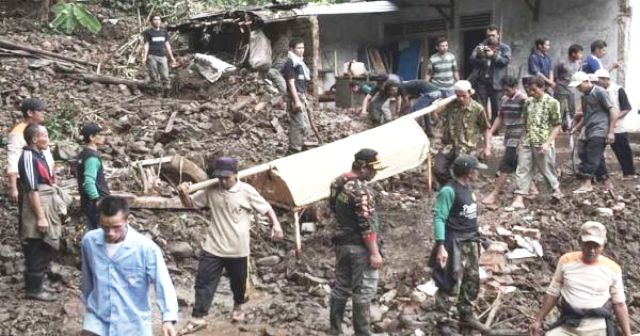 The death toll from devastating floods and landslides in Indonesia has risen to 26, an official said today, with hopes fading for 19 others still missing. Aid has begun pouring into Garut in the west of Indonesia’s main island of Java, where 23 people died and 18 remain missing after torrential rain and fast-rising floods swept through the region, the national disaster agency said. Receding flood waters revealed scenes of destruction, with houses reduced to rubble and upturned cars and debris strewn throughout muddy streets.

Among the dead or missing are more than a dozen children under 12 years of age, though several have yet to be formally identified, the agency said. Relief teams and army personnel have moved into Garut to search for those still missing, while drones are assessing the scale of destruction from the air, disaster agency head Willem Rampangilei said in a statement.

“There is plenty of food and clean water available. The community is also helping out,” Rampangilei said, adding that a disaster report had been sent to President Joko Widodo. Temporary shelters and makeshift kitchens have been established to assist the estimated 430 people left homeless, with blankets and clothing being trucked in by emergency crews.