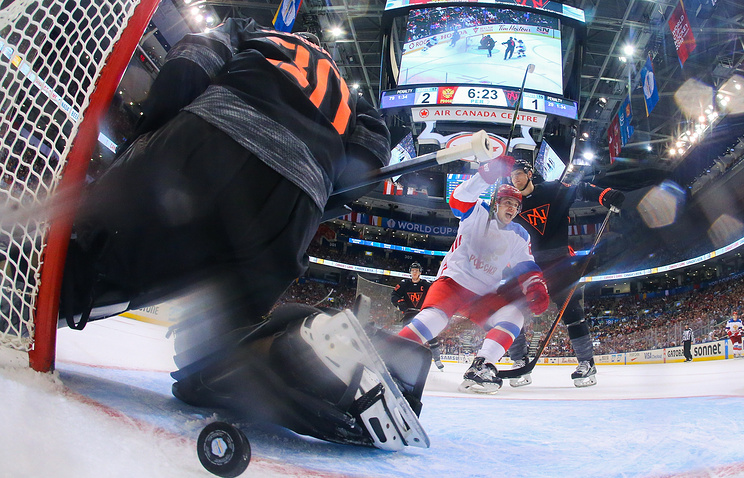 “This win was extremely important because we now have tasted victory,” Tretiak, the world’s legendary ice hockey goaltender, said in an interview with TASS. “The boys displayed strong will.”

“There were a lot of slip-ups in the opening minutes of the match, but we like this kind of game,” Tretiak, the holder of the 1981 Canada Cup trophy, said.

Team North America is comprised of under-23 players from Canada and the United States. Led by their Head Coach Todd McLellan, who is also the current head coach for the Edmonton Oilers, the team’s players come from various NHL clubs among top draft picks.

Having shut out Europe’s ice hockey heavyweights Finland with a 4-1 win, the North America Team was both quick and aggressive to score against the Russian squad early in the opening period.

The score of 1-0 remained unchanged until the break before the next 20-minute period, which the Red Machine used to humiliate their opponents with four unanswered goals. However, the North American Team braced up in the closing minutes of the middle period, found a loophole against solid Russian goaltender Sergei Bobrovsky and answered with a goal driving the score up to 4-2.

Russia’s Bobrovsky, who recorded 42 impressive saves in the match, allowed the Team North America to put another puck in his net in the early minutes of the closing period, but cemented the goal for the remainder of the game leaving the score unchanged at 4-3 in favor of Russia.

Summing up the stats of the scored goals – pucks for the Russian team were delivered by Vladislav Namestnikov (30th minute), Nikita Kucherov (31st), Yevgeny Kuznetsov (34th) and Vladimir Tarasenko (36th). Auston Matthews, Morgan Rielly and Ryan Nugent-Hopkins scored for the North American side in the 6th, 38th and 44th minutes respectively.

Both teams are now set for their final games of the group stage on Thursday, when the Russians are scheduled to take on their long-time rivals Finland and the young Team North America are bracing to face off with the experienced squad from Sweden.

The 2016 World Cup of Hockey is being held in Toronto between September 17 and October 1.

The World Cup of Hockey is an international successor to the previously famous Canada Cup (held between 1976 and 1991). After the international event was inaugurated in 1996, it was staged only once again in 2004.

The World Cup of Hockey was organized by the NHL and therefore it was played according to the league’s rules unlike the annual Ice Hockey World Championships and the quadrennial Winter Olympic hockey tournaments, which are sanctioned by the IIHF and are played according to different rules.

The matches of the World Cup of Hockey are played outside the NHL regular season allowing the league’s best players to compete in the international event unlike the annual World Championships, which usually overlap with NHL’s playoffs.