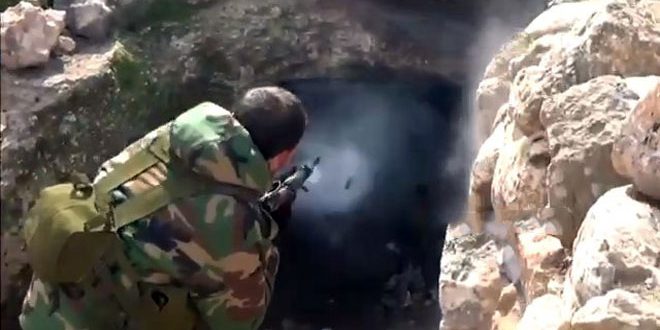 Syrian army units today continued to launch wide-scaled military operations against dens and positions of the Takfiri terrorist organizations across the country, inflicting heavy losses upon them in the arms and personnel.

Army units today carried out a number of operations against the Takfiri terrorist organizations in Kafr Nabbudah, Atshan, Skeik, Mourek, the surroundings of Maan, Kawkab, Souran, Um Hartain, Talet al-Nasirieh, Tal Bazam and Wadi Hwair in the northern countryside of Hama central province, according to a military source.

The source added that scores of Jaish al-Fateh terrorists were killed in the operations, others were injured and a number of their positions and vehicles were destroyed.

A number of ISIS and Jabhat al-Nusra terrorists’ positions and vehicles were destroyed and many terrorists were killed in concentrated air strikes in the eastern and northern countryside of Homs province.

The army air force destroyed ISIS terrorists’ vehicles, some of which equipped with machineguns, and killed a number of terrorists at the surrounding of al-Tharda mountain in Deir Ezzor.