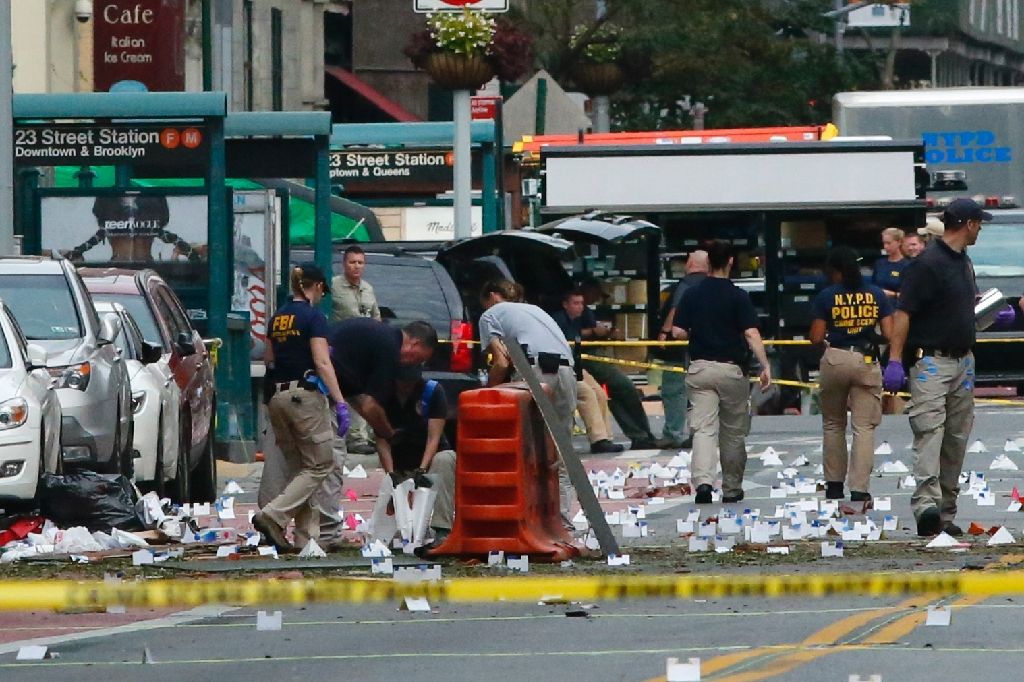 Bombs found in New Jersey after string of US attacks

US police found multiple improvised explosive devices in New Jersey, one of which detonated, the FBI said today as investigators probed three attacks carried out on US soil in one day.

Authorities say there is no evidence the attacks were coordinated but their timing in less than 24 hours raised fears about security — already a major issue in the country’s deeply divisive presidential election battle between Hillary Clinton and Donald Trump.

In the latest incident, “there was a suspicious package with multiple improvised explosive devices” found at the Elizabeth, New Jersey train station, tweeted the FBI’s Newark office after the devices were found late Sunday.

“In the course of rendering one of the devices safe, it detonated,” the FBI said, adding that nobody was injured.

Earlier the mayor of the city of Elizabeth, Chris Bollwage, told journalists that two men had found the package late Sunday and informed authorities after noticing “wires and a pipe.”

Police had already been investigating a Manhattan bombing, a Minnesota mass stabbing and a New Jersey pipe bomb blast.

Police uncovered a second bomb four blocks away and defused it safely, before sending it to the FBI in Virginia for forensic examination.

The FBI’s New York branch tweeted that officers “did a traffic stop of a vehicle of interest” but “no one has been charged with any crime.”

In New Jersey on Saturday, a pipe bomb exploded in a trash can on the route of a Marine Corps run before the start of the race, causing no injuries but forcing its cancellation.

On Sunday, rail services in that state were suspended between Newark airport and Elizabeth as reports of the suspicious package there emerged.

In the Midwest, an assailant reported to be Somali-American went on a stabbing spree in a shopping mall in St. Cloud, Minnesota, injuring nine people before being shot dead by an off-duty police officer.

US authorities said the motive of all three attacks was unclear, but officials quickly identified them as terror-related.

“If you look at a number of these incidents, you can call them whatever you want: they are terrorism though,” New Jersey’s Republican Governor Chris Christie, a member of the Trump campaign, told CNN.

“A bomb exploding in New York is obviously an act of terrorism, but it’s not linked to international terrorism,” Democratic New York Governor Andrew Cuomo said Sunday after touring the scene of the explosion in Chelsea.

“In other words, we find no ISIS connection, etcetera,” said Cuomo in reference to the Islamic State group. But he also stressed the lack of an international terror link was preliminary.

There was no claim for the bombings in Manhattan or New Jersey, but a jihadist-linked news agency, Amaq, claimed that an IS “soldier” carried out the Minnesota stabbings.

Clinton, whose lead in the polls has taken a dip, condemned what she called “apparent terrorist attacks.”

Trump meanwhile tweeted his “best wishes and condolences to all of the families and victims of the horrible bombing.”

Fifteen years after the September 11, 2001 attacks, officials stress that the United States is safer from terror plots that originate from overseas but more at risk from the lone-wolf attack perpetrated by individuals who may be inspired by IS or Al-Qaeda propaganda.

In Minnesota, FBI agent Rick Thornton confirmed that federal agents were investigating the stabbing as “a potential act of terrorism,” as local media identified the suspect as a 22-year-old Somali-American.

Police confirmed that the assailant asked some victims whether they were Muslim before attacking them and made “references to Allah.”

“In many of these cases, we don’t know until two, three or four days later whether or not there is a terrorist link,” warned New York Congressman Peter King in a CBS television interview.