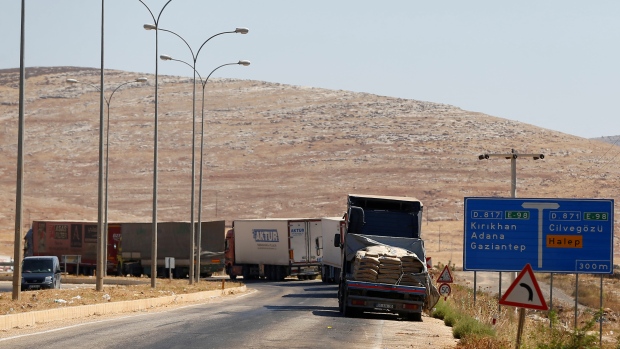 Two 20-truck aid convoys destined for eastern Aleppo with enough supplies to feed 185,000 people for a month are still stuck in Turkey, a UN spokesman said today, hours after a ceasefire in Syria expired.

The UN has said it does not have sufficient security guarantees from all sides in the conflict, now in its sixth year, to be able to deliver to eastern Aleppo. The aid has been sitting at the border for around a week.

The UN also wants to deliver to other hard-to-reach areas in Syria, but says it has not received necessary permissions from the Syrian government to proceed.

The seven-day ceasefire declared by the Syrian army expired at midnight with no announcement of its extension. A Syrian rebel official said the truce had ended, and there was no hope the eastern Aleppo aid would be delivered.

Up to 275,000 people remain trapped in that part of Syria’s most populous city without food, water, proper shelter or medical care, said UN Under Secretary General for Humanitarian Affairs Stephen O’Brien.

“I am pained and disappointed that a United Nations convoy has yet to cross into Syria from Turkey, and safely reach eastern Aleppo,” O’Brien said in a statement.

He referred to a 20-truck convoy, the first of two that would have carried flour and other food supplies, enough to feed some 185,000 people for one month, he said.

Both convoys are still sitting at the Turkey-Syria border, where they have been for almost a week, UN spokesman Jens Laerke said.

Humanitarian access to Aleppo hinges on control of the main road into the besieged rebel-held part of the divided city.

The road needs to become a demilitarised zone in order for aid to proceed. Russia has said the Syrian army had begun to withdraw from the road, but insurgent groups in Aleppo have said they have seen no such move and would not pull back from their own positions around the road until it did so.

“I hope that all parties to the conflict, and those with influence over them, would see the convoy as an opportunity to move forward,” O’Brien said.

“Humanitarian aid must remain neutral, impartial and free of political and military agendas.”