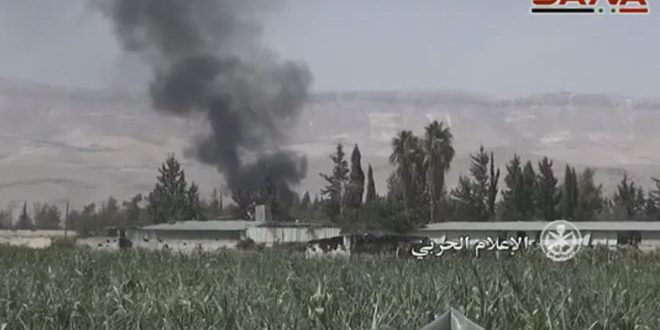 The armed groups breached the truce regime 44 times during the last 24 hours by targeting citizens and a number of military positions with machine-gun fire and shells in Damascus, Damascus Countryside, Aleppo, Lattakia, and Homs, Syrian News Agency “SANA” quoted a military source as saying.

The source told SANA that the armed groups breached the truce regime six times through attacking a number of the military posts and the civilians with shells and machineguns in al-Zara station, al-Matahen, the farms of Qamhana town and the western foothill of Zain al-Abidin Mountain and to the southwest of Maardes in the countryside of Homs central province.

The source added that the armed groups also breached the truce regime three times in Quneitra through attacking the town of Khan Arnaba, al-Hadar village and Tal al-Hamirieh with shells and machineguns.

A source at Quneitra Police Command told SANA that the armed groups killed a child and injured a 4-year-old girl in Khan Arnaba town and three civilians were also injured including a child and a material damage was caused in Hadar town.

The armed groups in Hama countryside on Saturday breached the truce regime through firing rocket shells on the villages of Mreiwed and al-Moubatan in the northern countryside of Hama central province.

A source at Hama Police Command told SANA reporter that the armed groups fired a rocket shell on Mreiwed village and nine other shells on al-Moubatan village to the north of Hama City.

The source added that the attack caused material damage to the private and public properties.

Earlier, the source mentioned that the armed groups attacked with machineguns and shells the civilians and a number of the military posts in the villages of Khirbet al-Souda and Kafr Nan and in Hirsh Tasneen village in the northern countryside of Homs central province.

The source indicated that the armed groups breached the truce regime two times in Joubar neighborhood in Damascus and two times in Bala village and the Agricultural Institute in the Eastern Ghota in Damascus Countryside.

11 breaches were also observed in Lattakia coastal province in the areas of Rwaiset Rashou, Sher al-Dab’a, Ain al-Bida and Abu Ali Mountain, according to the source.

The truce regime is applied across Syria for seven days as of 19:00 on September 12th 2016 and until 23:59 on September 18th. The army reserves the right to respond decisively using all types of firepower to any breach by armed groups.

A military source announced that the armed terrorist groups breached the truce regime by an infiltration attempt and attacking a number of military posts in Jobar east of Damascus on Friday.

This breach, according to the source, necessitated an appropriate response by the army units operating in the area where it inflicted heavy losses upon the terrorists in personnel and equipment.

Provinces, SANA- Three civilians were injured and material damage were caused in terrorist attacks with rocket shells on al-Qaboun residential neighborhood and al-Abasiyeen area on Friday, in a new breach by the armed groups for the truce regime which came into effect on Sept 12.

A source at Damascus Police Command told SANA that terrorists targeted al-Qaboun neighborhood with a rocket shell, leaving three persons injured, as they launched other five shells landed in the vicinity of al-Khumasia Company in al-Abassiyeen area, causing only material damage.

Two civilians were injured in terrorist sniper shooting on the locals of the terrorists-besieged Kefraya town in the northern countryside of Idleb province on Friday.

Local sources told SANA that the snipers of the terrorist armed groups positioned in Maaret Masreen shot on the locals of Kefraya town, causing the injury of two young men in the second and third decades of life.

The two towns of al-Foua and Kefraya are repeatedly targeted by terrorist attacks and snipers of Takfiri organizations leaving victims among civilians mostly women and children.

Girl killed, four others injured in breach of truce by armed groups in Quneitra countryside

One girl was killed and four others, two of them children, were injured when armed groups breached the truce regime by targeting Hadar village and Khan Arnaba town in Quneitra province with mortar and artillery shells.

Earlier today, the source said that the armed groups positioned in Jubata al-Khashab fired 11 mortar and artillery shells on the houses of Hadar village, injuring three persons, one of them is a child, and causing material damage.

A source at Aleppo Police Command told SANA reporter that terrorists fired a rocket shell that landed on the second floor of the Syriac Catholic Church, causing material damage to the church on the outskirts of al-Aziziah neighborhood.