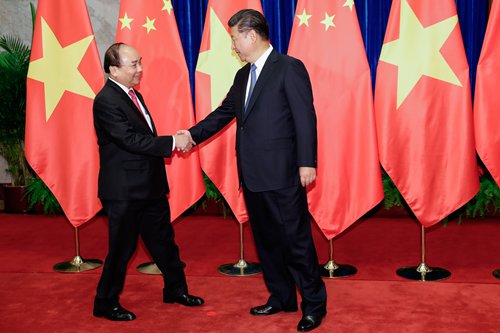 Analysts said how China and Vietnam manage their maritime differences would set the tone for other sea claimants.

Xi said the two countries’ common interests far outweigh the differences, and both sides should use the current negotiation mechanisms to push forward the follow-up work of joint exploration of waters outside the Beibu Gulf, according to the Xinhua News Agency.

Phuc began his first official visit to China on Saturday since he was elected prime minister. It is also the first high-level visit to Beijing by a Vietnamese leader since the 12th National Congress of the Communist Party of Vietnam.

During his meeting with Chinese Premier Li Keqiang on Monday, Phuc said China and Vietnam would manage their differences, conduct maritime cooperation in areas of low sensitivity and maintain a stable situation in the South China Sea to prevent the maritime issue from casting a shadow on bilateral ties.

The two countries are ironing out a more detailed and practical mechanism to control maritime disputes by establishing a Code for Unplanned Encounters at Sea (CUES) and providing hotlines for senior officials, Zhuang Guotu, head of the Center of Southeast Asian Studies at Xiamen University, told the Global Times.

As claimants on the South China Sea issue, Vietnam and China could settle disputes through negotiations and cooperation, which will be used as a reference to solve disputes with other claimants in ASEAN, Zhuang said.

China and 10-member ASEAN said they would adopt the CUES and establish hotlines between China’s and ASEAN members to avoid potential naval clashes in the South China Sea during the ASEAN-China Summit earlier this month.

“But we should also note that Vietnam’s low profile following The Hague arbitral court’s ruling on the South China Sea is meant to protect its vested interests in the region. It will not give up its balanced foreign policy of cooperating with the US, Japan and India to contain China,” Gu Xiaosong, an expert on Southeast Asian Studies at the Guangxi Academy of Social Sciences, told the Global Times.

Gu singled out US President Barack Obama’s visit to Vietnam in May and India’s $500 million credit line to Vietnam for defense cooperation in September.

According to data from the Vietnam Chamber of Commerce and Industry, trade between the two countries reached $32.3 billion in the first six months of this year, up nearly 2 percent from the same period of the previous year.

Li and Phuc witnessed the signing of documents on the economy and trade, production capacity, infrastructure, education and other areas, according to Xinhua.

Increased economic cooperation in the region could help cool the simmering South China Sea disputes and benefit regional development, said Zhuang, adding that China could share its technologies with Vietnam to help develop its infrastructure.

Since Hanoi is determined to further industrialize the country, China can be of great assistance and provide investment along the path, said a Xinhua commentary, adding that China’s “Belt and Road” Initiative dovetails well with Vietnam’s “Two Corridors and One Economic Circle” plan.

However, Gu also said the Vietnamese government sometimes imposes restrictions on Chinese investments out of fear that its economic lifeline would be controlled.

“The country should welcome more overseas enterprises for its economic development,” Gu said.