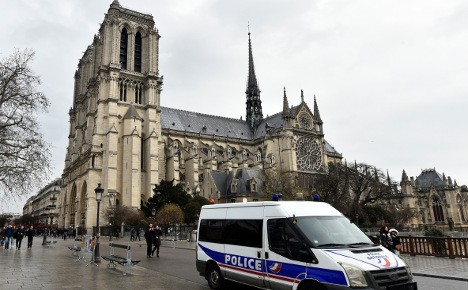 Here’s what we know so far about the women who apparently wanted to blow up a car near Notre Dame before allegedly planning an attack on Gare de Lyon train station.

The French president said today that a terror cell had been “destroyed and an attack had been foiled”. Here’s what we know so far about three women who had planned the latest atrocity in France.

Who are the women arrested?

The three have been described by authorities as “radicalized and fanatical”. The interior minister Bernard Cazeneuve said they were “ultra-determined”.

So far only the name of Ines Madani has been released. The 19-year-old has been described as the ring leader of the cell and it was her father’s car that was found filled with gas cylinders close to Notre Dame Cathedral in Paris in the early hours of Sunday morning.

Madani was known to police and intelligence services and was described by several police sources as “very dangerous”. It emerged that she had pledged allegiance to Isis.

She was categorized “fichée S” meaning they had identified her as possible threat to security because she had been radicalized and had tried to travel to Syria, presumably to join up with Isis.

Police found a letter on Madani, written to her mother, in which she stated she wanted to avenge the death of Abou Mohammed al-Adnani, the senior figure from Isis who has ordered attacks on western targets particularly in France. He was killed in an air strike last month.

Less is known of the two accomplices arrested with Madani. One was named Sarah, aged 23 years-old and the other Amel, aged 39, according to reports.

All three were arrested in the small town of Boussy-Saint-Antoine, around 25km to the south of Paris on Thursday night.

Reports say they were each armed with knives and Madani used hers to stab a police officer, who responded by shooting her in the legs.

What were they planning?

It seems their initial plan was to blow up the car near Notre Dame Cathedral in the heart of Paris in the early hours of Sunday morning, but their plan went awry.

They Peugeot 607 car they parked near Notre Dame was filled with gas cylinders, some full , some empty and two or three cans of fuel.

There was no detonator or trigger found in the car but officers did find a “burned cloth”, suggesting that was how they were planning on setting the car alight hoping the gas cylinders would then explode.

But the the car failed to set alight and they fled the scene fearing they had been spotted by plain clothes officers.

The discovery of the vehicle a short while later sparked a police man hunt that the interior minister described as a “race against the clock”.

Inside the car police also found notes written in Arabic which turned out to be verses from the Koran.

With their plan to blow up a car in the heart of Paris, near one of the city’s most famous tourist attractions, having failed it appeared the three then decided to launch further attacks.

Police intercepted communications between Madani and another woman which confirmed their fear they were about to try to strike again.

On Thursday an urgent message was sent around police in the capital warning of an imminent attack on a train station in Paris. Unconfirmed reports in the French press today claimed the cell wanted to attack the Gare de Lyon station although they did not say how exactly.

Reports also claimed they wanted to attack the RER D station at Boussy-Saint-Antoine.

But luckily police had managed to track them down to the small town in the Essonne department and arrest them before they could act.

Did they have connection to other jihadists?

According to reports the three may have been in contact with a French jihadist in Syria who had been directing and guiding them. The name of Rachid Kassim was given. He is believed to have ordered and guided those who carried out the brutal murder of the French priest near Rouen in June.

Le Figaro newspaper also claimed Sarah, the 23-year-old was in contact with Larossi Abballa, who killed two police officers at their home just north of Paris in June.

Other arrests made in connection to the terror cell suggested some were in contact with Hayat Boumeddiene, the partner of Amedy Coulibaly who killed four people at the Jewish Kosher store in January 2015. Boumeddiene is believed to be in Syria.

In all nine arrests have been made in connection the car abandoned at Notre Dame, incudling one woman believed to have been in the car with Madani.

France’s counter-terrorist prosecutor Francois Molins is due to give a press conference later today.